Jill Kelly is simply perfect!  I like her sun-tanned body, tanlines, big fake boobs, sexy feet, hot ass, hot body, pretty face, brown eyes, and blonde hair.  Jill Kelly is gorgeous!Not only beautiful, she can take a facial too.  She isn’t affraid to take a dp and to give a rimjob to a man. 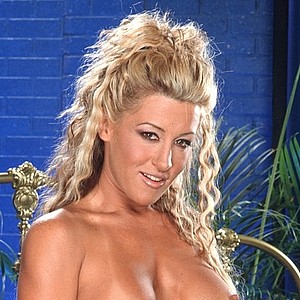 Comments:  While best known for her work in adult movies, she has also made appearances in mainstream Hollywood productions, including Spike Lee’s He Got Game and Matt Stone’s Orgazmo.
Kelly started out as a stripper at the Babydolls adult entertainment theater in her hometown, first performing at the age of fifteen with false identification. After she broke up with her then-boyfriend, he informed the club of her true age, which prompted them to fire her. When Kelly turned 18 she returned to the club, commenting that “they didn’t even recognize me.”
She later did live sex shows with Tiffany Million at the O’Farrell Theatre in San Francisco, and the two took a trip to Las Vegas to see the AVN Awards show in 1993.
Kelly’s first acting role was in the 1991 action-adventure film The Roller Blade Seven, directed by Donald G. Jackson and produced by Scott Shaw. She went on to appear in non-erotic roles in several other films with Jackson and Shaw.
Kelly started her own company, Jill Kelly Productions (JKP), in October 1998. In April 2005, following the company’s bankruptcy filing, Penthouse magazine paid $1.765 million to acquire its assets, which included the entire JKP back catalogue and nearly 60 unreleased features.
She met fellow pornographic actor Cal Jammer in 1993 at the above-noted CES convention and married him a month later. Kelly separated from Jammer due to his infidelities off-camera, which she called “the deal breaker.” Jammer took the separation hard, committing suicide by shooting himself with a gun on the road in front of Kelly’s house.

This charming lady is part of the PYGOD‘s wives Harem

this site is compliments of: pygod.com