I’ve got a real crush for Jayna James.  Seeing her smile and hearing her talk is just enough to give me a huge hard-on and jerk-off.  (Which is pretty unusual for me, a 24/7 adult webmaster).  With her, it was love at first sight.  Jayna James is cute, nice, sweet, charming, smiling, and always willing.  Jayna got the ultimate superbimbo look to be the supreme living fuck doll.  I love you Jayna, Amy, Barbi or whatever you call yourself. 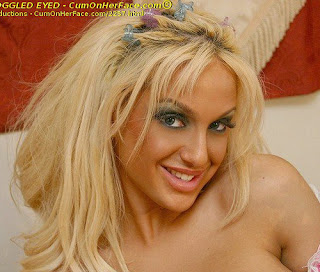 Breast Augmentations: Amy Anderssen aka Jayna James has had 5 breasts augmentations always increasing her breast size. In her 2007 Scoreland profile she was listed as 36EE. On May 4, 2010, Amy Anderssen / Jayna James had her current 2000c implants placed, upgrading her already huge boobs to a 40HH cup size. Oh yeah!!  As of November 2013, Amy announced through twitter that she has begun looking to reduce her bust size through smaller implants.  Boooo!

Rumors said that she’s got to take nearly one-year hiatus due to breast enlargement complications.  Which explain her nipples size difference at some time of her career. As the old saying goes, “You must suffer to be beautiful!”

To jumpstart her career, Amy tried to obtain a visa to work in the United States. However, she confronted several problems with customs and decided to relocate to London, where she worked for Bluebird Films under the name Amy Azurra. During this time, Amy underwent the first of 5 breast enhancement surgeries that would eventually swell her bust to a massive 40HH.

Since 2005, Jayna James works as an escort, mainly in Toronto, Ontario, Canada, and occasionally travels all around Canada -Vancouver, Montreal, London, Ontario (under the name Amy Azzure), and in Las Vegas, Nevada in the United States. She left the name Jayna James behind and reinvented herself as Amy Juggs.  Then, more recently, her boobs got bigger, her ass rounder, and her hair darker, changer her name of Amy Juggs for the name of Amy Anderssen and became a regular LiveJasmin webcam model.  She still use her name of Amy Juggs from time to time.

No matter which name she uses, Jayna aka Amy Anderssen aka Amy Azurra will forever be reputed for her big fake tits, her beauty, and her willingness to do just about anything.

Actors I enjoy working with: Jean val Jean, Peter North, and Mandingo
My favourite scene I played in: It was with Mick Blue in Tits Ahoy 8, Mick rocked my world and fucked me good!
My favourite position: I love Doggie-Style and Tit-Fucking, and any positions involving my tits and ass baby!!! LOL!!!
My favourite scene types: I love scenes in Mansion, Luxury Condo’s, by the Beach, and Group Scenes.

My name is Amy Anderssen, I am a gorgeous blond with long flowing hair, a beautiful smile, with features of an angel, and have an unbelievably toned body.
My most noticeable feature is clearly my cup breast. They are obviously hard to miss.

I really hope you enjoy my pictures. I can’t wait to see you. 100 percent real